This is the only feature in Roku by which you can use the third party application on Roku. And it is the most important feature of all. Roku supports both screen mirroring and screencasting. If you understand the concept of screen mirroring, you can optimally use your Roku streaming stick.

If you want to share content from your Android device or a tablet to the Roku connected TV, you need to use a feature called Screen mirroring. It literally mirrors the screen of your android phone to your TV. And you can control everything using your android phone. In simple terms, it just acts as a duplicate display streaming the same content as your Android device.

If you are sharing a selected content from your Android device to a TV or any other device, then its called casting. The end user can’t access any other contents except the casted contents. And when you are casting a picture to the nearby android device/TV, the device shows the content as a playback. In other words, the contents are transferred wirelessly to the device and it’s stored in the temporary storage. And when playing/seeing these contents on the Roku device, they are fetched from the temporary storage. 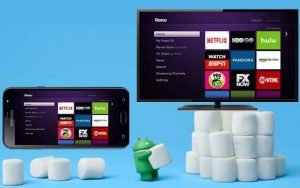 Roku supports both screencasting and screen mirroring. When performing the screen mirroring the battery of the mirroring device could drain faster. Roku supports Miracast. So it can cast to any device that supports Miracast. If you have an Android smartphone or a Windows laptop with Miracast support, then it’s easy to cast anything to your Roku streaming stick. Unfortunately, Miracast doesn’t support Apple devices.

How to mirror your android screen on Roku streaming stick

If you want to cast particular pictures or videos on the other devices, you need to follow the same steps to establish a connection. Now navigate to the gallery and select the files you want to share. Now select the menu at the top and select cast. Select the device to be cast, in our case, its Roku. Now the selected content will cast to Roku.

How to mirror your windows screen on your Roku streaming stick


It is similar to the previous method. First, you need to enable screen mirroring from the system settings menu. Now go to the notification center at the windows 10 or Press Windows + C on windows 8.1. This will open up an advanced settings menu. Now Select project> Add a Wireless display> Roku.

Wait for few seconds for the screen to be cast. Once the process is complete, you can use this display as a wireless display. And in a similar manner, you can cast anything to the display.

Screen Mirroring opens Roku to a lot of new possibilities. As we all know, Roku is a closed device. And this is the only available way to communicate with other devices. You can play all your favorite game on the big screen, by using an Android device as a wireless joystick. You can cast Kodi from your windows PC to stream all the movies and TV shows for free. Here is a step by step guide to use Kodi on Roku via screen mirroring. The only limitation is your imagination. These are some of the few advantages of Roku Screen Mirroring.

Well, these are the steps to perform Roku Screen Mirroring. Hope the tutorial is informative and clear. If you are facing any issue, do let us know via comments. We would be glad to solve your issue.