The heat is on!! UFC fans are set to fire after the announcement of UFC 229 fight between McGregor vs Khabib. Recently during the 25th anniversary of UFC, It has been officially announced a groundbreaking match between the current lightweight champion Khabib vs Two title holder McGregor. The UFC 229 match is scheduled on October 6, 2018, at T-Mobile arena at Nevada, Los Vegas. The best thing about the match is, Khabib has never lost a match and he holds the record for the highest straight wins in the UFC history. On the other hand, McGregor holds the record for two title winner. These two are the best of the best, and this is enough to sell all the tickets in a flash. Since the match between Khabib vs Mcgregor is a high demand match, the ticket rates are in the range of $2,505, $2,005, $1,505, $1,005, $755, $555, $405, $355, $305, $255, and $205. Since all the tickets are sold, people are looking for lots of alternatives. Don’t worry, we got a couple of alternatives to watch UFC on Roku.

How to stream UFC on Roku

Basically, there are three different ways to stream UFC on Roku.

The first method involves adding UFC TV Channel on Roku and paying for the Match (PPV). But this method would definitely cost you high as you need to spend 64.99$ for a single match that lasts less than one hour. The cost is too high for a single match. So we worked on some trick to reduce the price of the subscription.


How to get PPV at a discounted price and stream UFC 229 on Roku?

By following this trick, you can cut the cost to less than half and watch all the UFC PPV matches.

All these events are international events. So we check the price of PPV Fight Pass in other countries. Surprisingly we found that in the Philippines, it costs only 920 Pesos for PPV HD and 2165 Pesos for the 6-month subscription + PPV HD. If you convert the price to USD, it will be around USD$17 and USD$40 respectively. The cost is almost reduced to half. Let us check how to execute this trick.

To buy the PPV, we just need to change the IP address to Philipines using IPVanish VPN. By using a VPN, we can connect to the Philippines IP address. Then just open the UFC official site and check the pricing. You will find the price in Pesos as seen in the image. So just proceed to the payment and complete it via Paypal.

We highly recommend you to grab the IPVanish 2 Year Plan as it costs only 3.74$/month. Because you can get the discount on all the matches for 2 years. 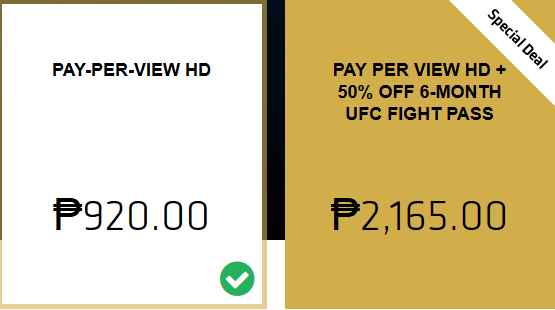 Once completed the purchase, just log in to UFC account and watch it on Roku. If you still want to watch the UFC match for free, proceed to the next method.

Who would go for the subscription when one can stream UFC 229 on Kodi for free. Yes, Kodi is the application we need to install on Roku, to stream McGregor vs Khabib fight on Roku. Roku is a  streaming device, that doesn’t allow piracy. It means you can’t install the unofficial third-party applications. So you need to tweak the Roku streaming stick to watch UFC 229 on Roku. Refer this article, to tweak and install Kodi on Roku.

After installing Kodi on Roku, you need to install an additional program or a script called as Kodi addons. Depending on the addon you are installing, you can stream any of the contents on Kodi. As of now, we are planning to stream McGregor vs Khabib UFC 229 on Roku. So you need to install a Live Sports addon capable of streaming UFC contents. Well, we had found the best Live sports addon for you.

The first Kodi Live Sports addon to stream UFC on Roku is Planet MMA. As the name suggest, Planet MMA is an addon that stream live UFC and boxing fights.

It is one of the best and the most reliable addon when it comes to streaming UFC matches. Previously, it was known as UFC Finest. Later the name is changed to Planet MMA. You can install the latest version of Planet MMA Kodi addon from Supremacy repository. With Planet MMA, you can stream other contents like MMA Matches and other fighting related contents. You can follow the below steps to install Planet MMA on Kodi.

Now open Kodi on Roku. And select Planet MMA addon from the home screen. Now you will see different sections available in Planet MMA Kodi addon. Due to the availability of vast contents, it has been categorized into various groups. To watch UFC on Roku, select UFC fight night section. Here you can find all the links to the live stream McGregor vs Khabib UFC 229 on Roku. On the match day, the streaming link will be available. Just click on the link to stream the contents.

Most of the cases planet MMA will work for sure. PPV services are based on the user IP, if you are streaming from other countries you won’t find the contents. So we highly recommend you to install IPVanish VPN to mask your IP with other country IP, so that you can access the PPV content. It also hides your streaming activity from your ISP or government and keeps you anonymous. So make sure to use a VPN before streaming UFC on Roku.

How to watch UFC on Roku using Fight Tube addon

After installing the Fight Tube Kodi addon, open the addon from the home screen. Now you will find the channel list and some boxing and UFC related contents. The contents are moderate. But the streaming quality is good. Just Select HBO Boxing and you will find the list of available streams. Select UFC 229: McGregor vs Khabib. Within a few seconds the match will be streamed live on your Roku. Enjoy the show!

By following these methods you can easily watch UFC on Roku for free. The only reason we are opting for screen mirroring option is that Roku can’t install the third application. So screen mirroring is the only available option. You can use the same method to play games on Roku or to watch other device’s content on Roku. If you are facing any difficulties to watch McGregor vs Khabib UFC 229 on Roku, just leave a comment. We will try our best to assist you!