Most of the streaming devices are surprisingly placed in the same price range. It proves the fact that “you get what you paid for”. When it comes to price, there is always an exception. Apple devices are always set apart from the rest. The quality and services provided by these devices are totally unmatched. Apple TV 4k is at the top of the Apple streaming devices. 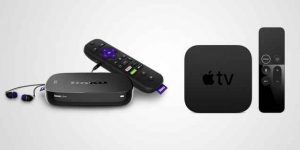 When it comes to Roku, it has 7 variants namely Roku Express, Roku Express+, Roku Streaming Stick, Roku Streaming Stick Plus, Roku Premiere, Roku Premiere Plus, and Roku Ultra. In these, Roku Ultra is a set-top box type device whereas the rest of them are streaming sticks. The base version supports up to 1080p, whereas the plus version supports up to 4K resolution. Roku ultra is the most advanced streaming box of all these devices.

So which is the best among these two streaming devices? Why Apple TV is double the Rate of Roku Ultra? Is it worth the Price? These are some of the common questions in the user mind. In this article, you will find answers to all these questions and we help you to decide which is the best. Let’s jump to the comparison between Apple TV Vs Roku Ultra.


From the above table, you can conclude a lot. The price of the Apple TV is double the Rate of Roku Ultra. But when you compare the specifications, Apple TV is two or three times more than the Roku Ultra. It is true that it is always value for money. Now let us discuss each feature in detail.

When it comes to processing speed, Apple is a beast. It beats all the streaming devices hands down. Here Apple uses A10 Fusion and Roku uses ARM Cortex-A53. So its Apple A10 Fusion vs ARM Cortex-A53. A10 fusion has an upper hand in integrated graphics and integrated LTE. Other features like execution timing, frequency scaling, Virtualization are almost the same. The graphics handling features of Apple processors are completely mind-blowing.

Each has its own operating system closed to the outer world. Apple Fire TV runs on TVOS 12 and Roku runs on Roku OS. Both the OS are so different from each other. We can’t even compare them. Apple TV supports only Apple applications. In the same way, Roku supports its own applications. When comparing User Interface, Apple UI is much better than Roku. In Roku, all the applications are called channels and there are lots of restrictions to the end user. In addition to that, it doesn’t provide a proper way to connect with other devices.

So far Apple TV is dominating in all the fields of comparison and these reasons are more than enough to go for Apple TV. In addition to this, Apple TV had got some additional features that will give you the push to move to Apple TV. Apple TV includes Bluetooth, Dolby Atmos, Dolby Vision, Voice remote for better user experience. Voice Remote and Dolby Atmos are available in Roku Ultra too. Dolby Atmos provides three dimensional sound to the 4K video quality. And obviously, you need 4K television to stream the 4K content.

This is the only place where Apple falls behind. That too, for a beast like Apple TV 4K, the price is worth it! And this is subjective depending on your budget and how much you are willing to spend on the streaming monthly. In either case, you will spend less than the traditional cable which cost around $100/month.

If you are looking at the medium cost streaming devices with all the features, Roku Ultra is the best-suited device for you. And it also provides some free contents via private channels. On the other hand, if you got a good budget go for Apple TV 4K. Its performance is unparallel and it allows you to store app and music in the 32GB/64GB. Unfortunately, you can’t store movies and TV shows on it.

Hope this article is informative and gave a detailed comparison of Apple TV vs Roku. Let us know which device you will choose? Share your points and opinion in the comment section.